Objective: Explore and analyze 40 planetary systems in VR with the use of a VIVE headset.

To build, download .exe and run the exe. To run through unity, go to build and run, add the planetarysystems file into the resource folder and the run the exe.

Using SEA, the user is able to do the following:

Fly through the universe and explore 40 unique systems.

Using the VIVE headset, the user can get a good grasp of the sheer size of planets. When Earth feels like a small beach ball, you can gain a lot of perspective. One system might be tightly condensed, with 3 planets orbiting each other or it could be much wider and sparse. Within a system itself, there is also disparity. Mercury looks almost like a moon next to Earth.

Each system contains two green rings, signifying the habitable zone within the system. A circumstellar habitable zone is the range in which water can be sustained on a given planet, it is where there is sufficent atmospheric pressure and it it not too hot or cold, and potentailly life could survive. That is why it is sometimes referred to as the Goldilocks Zone, as it cannot be too hot or cold but just right.

Adjust the rate at which time passes.

Using the slider on the top right corner of the user interface will adjust the rate of time passing. This can allow you to see planets with a much larger orbit complete a full orbit around their respective suns. It is helpful for also getting a good visualization at how slow some planets move in comparison to others, and how long a year on that planet would be.

Adjust the scale of the planets.

Using the slider on the top left corner of the user interface will adjust the scale of all the planets (and 2D view) that are currently in view.

Learn about each system and it's planets.

Learn about each systems: name, distance from our solar system in light years, the type of star, and how the planets were discovered and names of each individual planet. 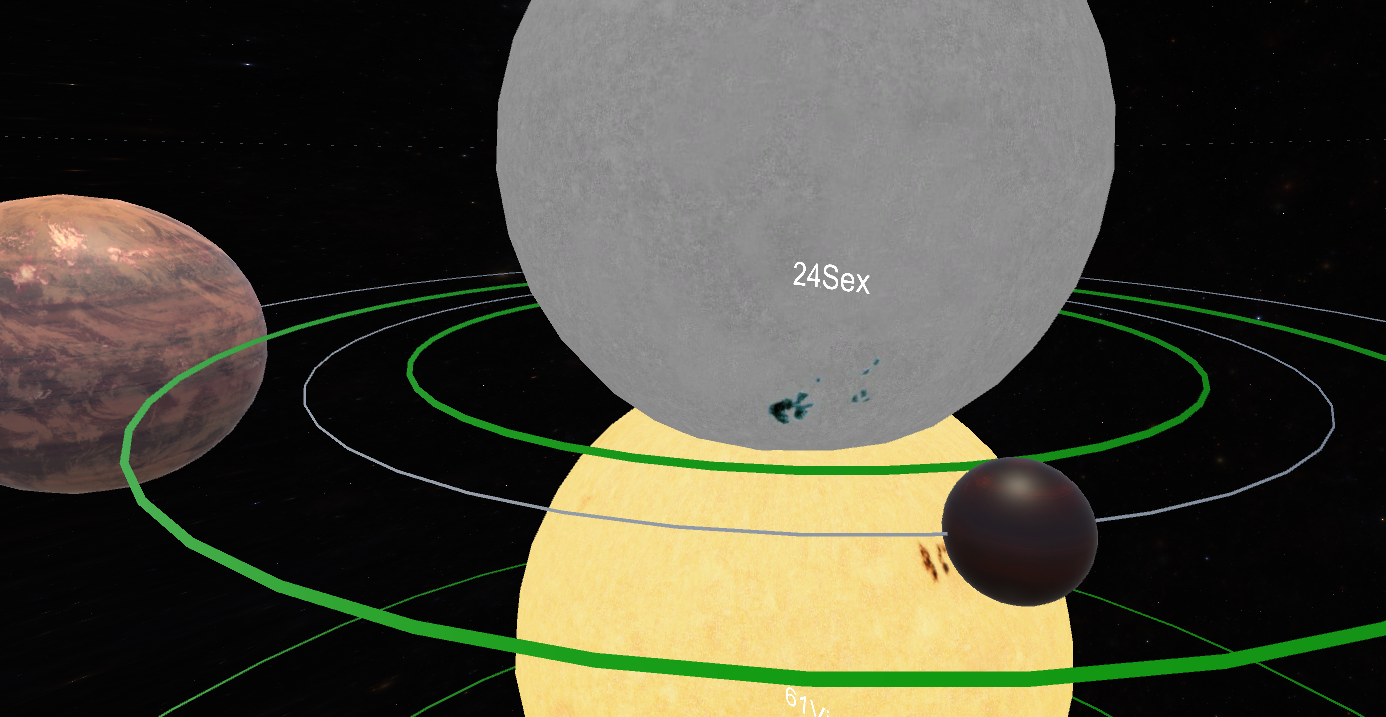 hen we first ran the application, I was completely taken aback by the sheer amount of space that planetary systems make up. Though we only have 40 systems within the application, you get an immediate sense of wonder at the idea of how many systems exist and how large the universe truly is. I learned a lot about habitable zones, orbits, interesting systems, and the size of planets themselves.

Immediately, the first planet I wanted to look at was Earth. To my surprise, Earth isn’t smack in the middle of the habitable zone of our Sun. In fact it is right on the edge, teetering close to being out of the “Goldilocks Zone” and much too close to the sun for comfort. (See figure 1) That itself made me realize there is a pretty sizable range within our system for the habitable zone. It almost looked like Mars was equidistant from the outer habitable ring as Earth was close to the inner habitable ring. (See figure 2) A couple hundred thousand miles more and Mars itself would be habitable. I did somewhat have a grasp on that, as there has been interest in colonizing Mars these past couple of years, and I assume it is because Mars isn’t beyond incredibly cold. Upon seeing this, I looked up the distance that Mars was from Earth, and it was 54.6 million kilometers! Oh man did that change my perspective. What felt like such a small distance in VR was way larger than I could have imagined. With this new view, when I put the goggles back on I again had a sense of wonder for how large the universe truly is. Well what about the temperature on Mars? I thought it must be much colder than I anticipated but looking that up again, the high on Mars is actually 20 degrees Celsius which means the sun must radiate an astronomical amount of heat!

Taking a step back (literally), I decided to look at habitable zones on other planetary systems. I did end up finding one planet in the 24 sex planetary system. (See figure 3) I also began to notice that some systems had very small habitable zones, which I assumed was due to the low heat that the sun for that system itself produced. (See figure 6)

As for orbits, there are some that are huge (like our own Neptune) and some that are very very small, such as the planet in the HD219828 system (See figure 5). I had always assumed that larger planets had larger orbits in general but we can see that is not the case.

Using the buttons built into our UI I was also able to explore 4 predefined sets; the solar system with the largest planets, with the most planets (outside of ours), with the Brightest stars, and solar systems with the longest orbital periods — meaning the longest years. (See figure 4).

This application allowed me to explore space in ways I had never imagined before. It was a great learning experience, from the small details to the larger details, like the scale of space and planets in comparison to ourselves! 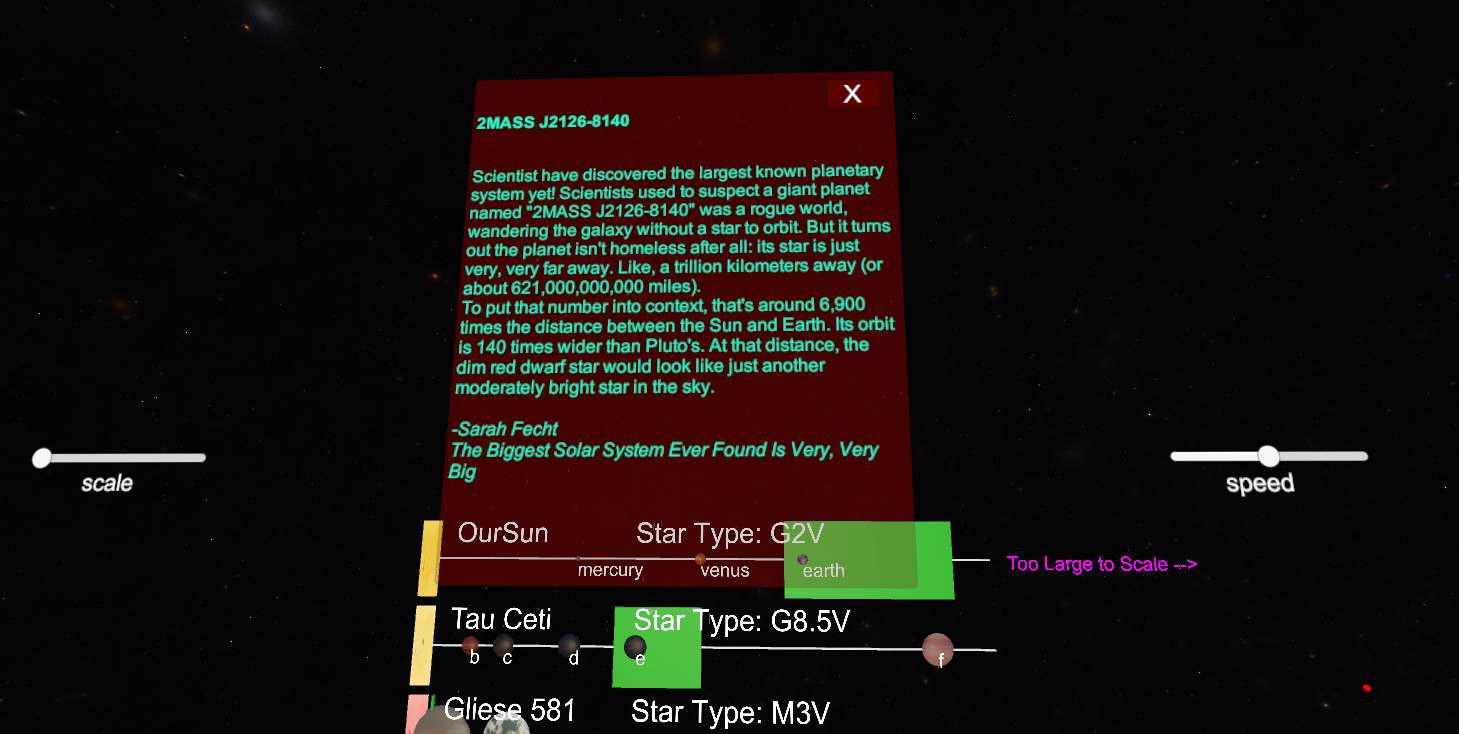 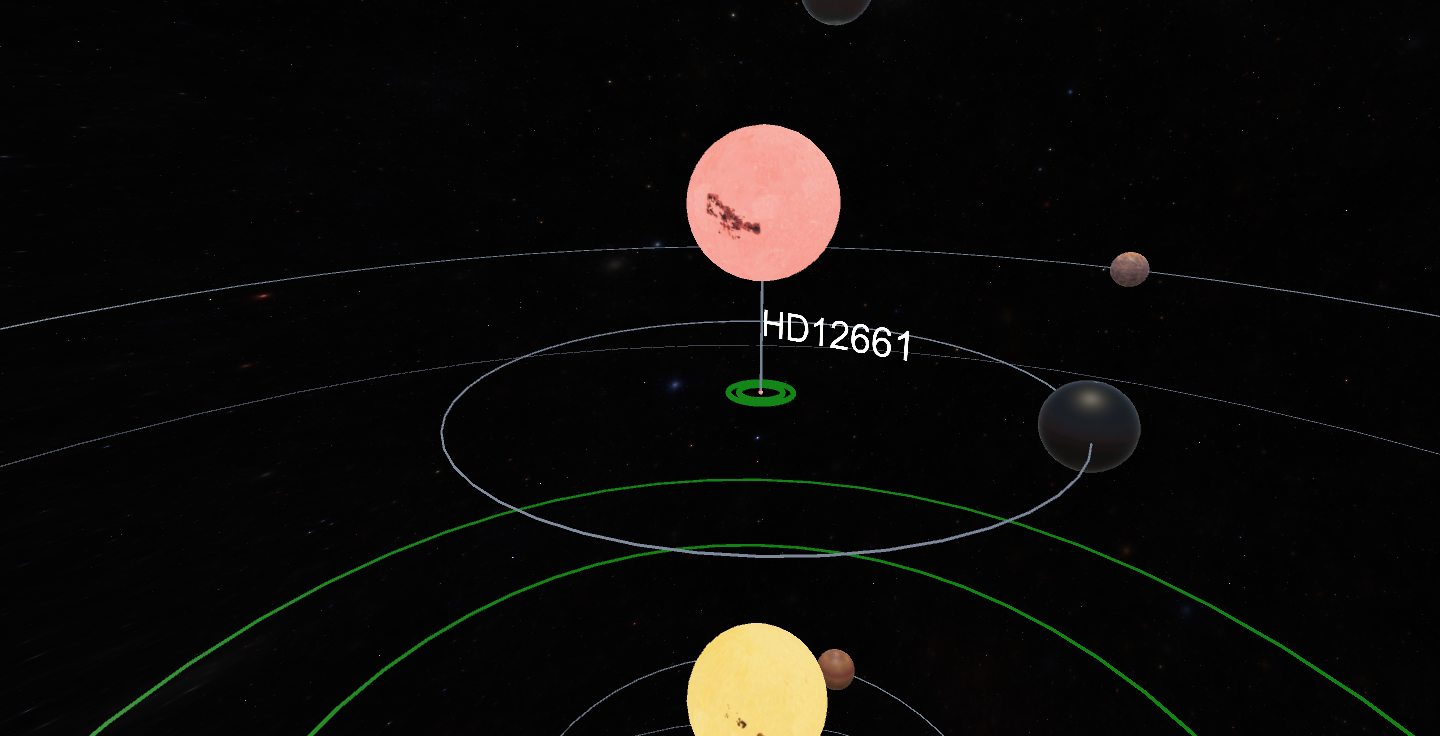 The best place to contact me is thorugh email!